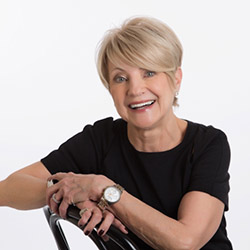 A market leader and Luxury Collection Specialist with over four decades of area expertise, Maria began her career in Real Estate in 1974.  She established her own firm, Rampinelli Realtors, in 1985.  In 1996 she merged her company with Prudential Janett Real Estate and became the Rampinelli Fine Homes Division.  In 2014 Prudential Janett was acquired by Berkshire Hathaway HomeServices.

Maria Rampinelli's winning strategies are recognized on local, state, and national levels. Maria is a perennial recipient of New Jersey Association of Realtors®’ (NJR) and Berkshire Hathaway HomeServices’ highest awards. Maria has held many board positions through the years from Director to President at West Essex Board of Realtors® and has served on many committees on local and state levels including Senate Coordinator from 1993 to 2001.   She also holds the NJR 40 Years Realtor® Emeritus Award.

Maria has an innovative approach to marketing, excelling at "thinking outside the box". She began staging right from the start, calling it "preparing the home for marketing". Always the first to jump on new technology, having her own website and multiple domain names back in the 1990s, hosting themed parties and open houses for Realtors®. In the 1990's, she flew to California to purchase the equipment to create virtual tours, Ipix would come to the East Coast until a greater demand was established. She has survived and flourished through four slumps in the marketplace and was consistently in the top tier of her market even when interest rates were double digits. Never one to shy away from a challenge, Maria is a survivor of breast cancer twice in her life and continues to thrive in our industry.

Maria Rampinelli has earned a reputation in New Jersey real estate for integrity, innovation, and commitment to her clients.